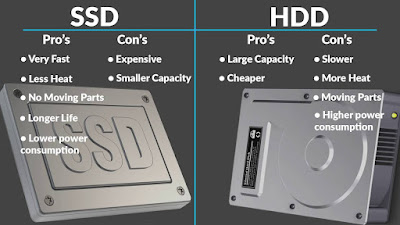 There are two types of memory, there is primary memory and secondary memory.

Now primary memory is temporary which is RAM but secondary memory is permanent and this deals with storage drives. Every computer needs a place to store its data, whether that data is photos, documents, video and audio files, or an operating system. A computer needs a place to store this data internally on a storage drive, and these drives also need to be non-volatile, which means that they will retain the data even if the power is turned off. There are different types of internal storage drives that a computer uses And these drives could be magnetic hard drives, solid-state drives, or hybrid drives. 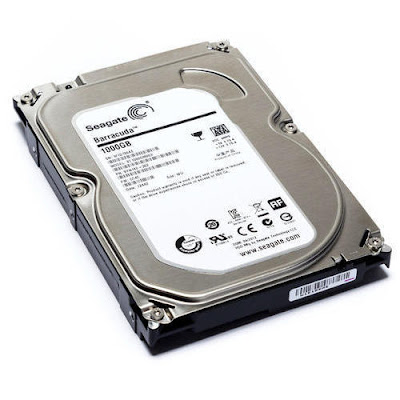 magnetic hard drives have been around since the beginning of computers. They were introduced by IBM in 1956, and even though they've been around for a long time, they're still used today.

The hard disk drive is a sealed case that contains magnetic disks. In these disks is where the actual data is stored On.

These disks rotate at high speeds, and as they do, the actuator arm either writes data to the disks or reads data from the disks depending upon what the user wants to do.

These magnetic disks can rotate at high speeds of either 5400RPM,7200RPMor 10,000 RPM. The typical hardware that's used today in desktop computers operates at a 7200 RPM range. A cheaper desktop hard drive operates at 5400 RPM, which is also the speed of a typical laptop hard drive.

State drives have transfer speeds averaging 6 gigabytes per second, which is considerably faster than the Bold parallel ATA.

Hard drives also come in two physical sizes. They come in 3.5 or 2.5 inches. 3.5 inches are what desktop computers and servers will use and 2.5-inch drives are what laptops will use. 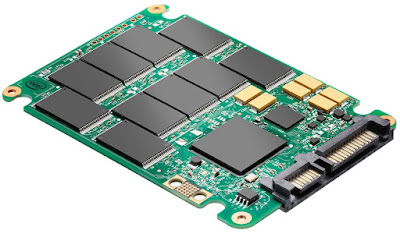 Another type of storage device is called an SSD or solid-state drive. these drives have no moving parts, so instead of using magnetic disks, these drives use flash memory chips to store data.

So the data transfer is very fast And in addition since they have no moving parts, they're also very quiet and more energy efficient.

The standard 2.5 inch SSD uses a SATA interface just like a hard drive, and the m.2 SSD would plug into an M .2 slot.  . SSD's are also more resistant to physical shock compared to hard drives, whereas if you were to physically Shake a hard drive, such as dropping it or jolting your computer, it could crash the drive and your data will be lost.

SSDs are also more expensive than hard drives, but you do get what you pay for it because they are considerably faster and you'll see a big difference in the performance of your computer, and they can also be used on both desktop and laptop computers.

Because of the price difference between SSDs and hard drives a lot of times, If you were to buy a new computer, the computer may come with both an SSD drive and a hard drive. So faster SSD would be a smaller capacity drive that would contain any data that would benefit from the speed and that you would access frequently, such as the operating system programs and documents in the slower hard drive would be a larger capacity drive that would be used for secondary storage.

For example, to store data that you would access less frequently or the drive would be used to store large files such as videos. Now you could buy or build a computer with one large SSD for all of your storage, but that would significantly increase the price of the computer, and it's almost pointless to have files that you infrequently access on an SSD, so This is why to save money, computers will use both an SSD and a hard drive. now there is also a solution where you can have an SSD and a hard drive as one physical drive instead of two separate drives and 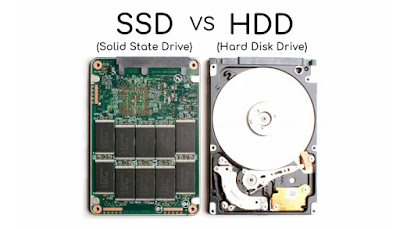 one of the most common questions these days. HDD or SSD? Which one should we choose?   And we know it's very hectic to choose the right story solution for you among the so many options you can go for nowadays. But of course, we can narrow down the best possible choices for, for example, beefing up your laptop with a lot of storage down to hard disk drives or solid-state.  Let's summarize which are the most popular facts about them. Obviously, the form factor could be different, but that's not necessarily to be the case. There are a lot of drives that look like that, and the state could be either HD or SD.

And again HDD stands for Hard disk drive, and they're based on spinning plates where your data is being stored, and the other option the SSD's, which can have many different form factors and more. Lately, we have the popular M2 devices. Well with them it's about Flash where we get a lot of speed advantages.

Difference between HDDs and  SSDs 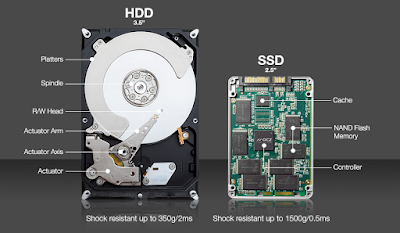 Since we talk about comparisons,

speed because that's the most defining one when it comes to good performance while choosing a storage drive for your PC, speed is going to be the major decisive factor and to be honest there's a significant speed difference between those two drives. Sees HDD drives use spinning this in order to perform reach right operations. There is significantly slower than the SSD drives. For instance, if you're moving files using an SSD drive, the copying speed can go as high as a few 100 megabytes, whereas the maximum speed when you're using a hard drive would be no more than 100 megabytes. In a nutshell, VSD is. At least a few times faster than a traditional hard drive.

When it comes to pricing because I'm pretty sure that's going to be the second component everybody is asking about. I think the HDDs are clear winners over here because they still continue to offer the best ratio in terms of dollars per GB. It's important to know though, that in the last few years the. Solid-state drives are catching up at a tremendous pace, meaning that hopefully, probably very soon. The pricing is both are going to be comparable, but to be precise, nowadays you can buy a 10 terabyte hard disk drive for about a few $100 and usually. All the SSD's are no more than two terabytes. I mean if you go for more that's going to cost you a fortune. Obviously, if you're looking for a budget-friendly solution out of this, had this drive is the better choice.

In terms of durability. And no, I'm not dropping it down, but definitely, SSD solid-state drives there. Way more durable because there are no moving objects on the inside. Therefore if you drop something on the ground, which I'm totally not doing right now. It's very likely that an SSD survives while with an HDD you're probably going to have some physical damage in terms of availability. Well, every single computer story is going to give you a great variety of options to choose from, no matter whether we talk about SSDs or HDDs. On the other hand, these are usually for the higher-end laptops like MacBook Pro where HDDs anyways can barely fit in the latest generations.

Yes, there are a lot of reasons to choose an SSD over an HDD. The most important question after getting to know all that is which of these technologies is more suitable to you. And it's very important that you, and only you make this decision. And first of all, I would recommend doing an analysis and figure out which is most important for you. What kind of implementation you're going to make? Are you going to make more video edits where you need a lot of IO? Obviously, SSDD better choice. Or he's going to be just made for storing some files like documents, music, movies, and so on where you don't need such a great speed where an HDD would apparently be suitable. So first of all, think about your specific requirements and what kind of computer you're going to build. Secondly, think about the budget and the money you can spend. 'cause sometimes we have limitations. If you have 200 bucks, you have to prioritize more storage or better performance. If you can live with less amount of free space but desperately need anything to open really quickly on your computer, then BSD so a great choice. But if you're seeking the best kind of capacity, no matter what kind of performance you're going to have from the computer, then. The HDD can be a very reasonable choice. Here's a simple example.

If you use your laptop for regular daily tasks such as sending emails, writing blocks, serving on the Internet and HDD would be the wiser investment. Since your workflow doesn't involve any heavy operations, there is no need to spend hundreds of dollars for SSD, but. If performance is what you're seeking for or gaming or video editing or other intensive operations which require a lot of data to be transferred between the processor RAM and the storage, then definitely the SSD is going to be your choice, so that's it for today and I know this is a very tough choice to make. 'cause usually when we build a new computer or when we're about to purchase a new laptop, we usually think about using this device for at least a couple of years. And choosing the right storage solution is definitely going to make you feel much happier with your device. One more thing, you know that's very typical for older laptops. If you want to quickly boost the speed of an old laptop without having to buy too many extra components. And if you notice that that laptop has an HDD. Swap it for an SSD drive and you're going to see a marvelously better performance.